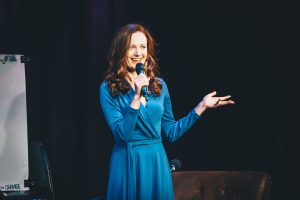 I’m an actress, philosophic consultant and speaker, host of The Happier Hour: Philosophy To Help Life Suck Less (a live monthly event and soon-to-be-podcast), and Founding U.S. Faculty Member for The School Of Life.

I’m super passionate about cultivating more IRL (in real life) meaningful conversations and I especially love the Circle model of highlighting a different virtue every meeting. About five years ago, I started a monthly philosophic dinner salon that focused on a different big idea, like Freedom or Truth or Hope, at each gathering. I started the series because I was tired of networking events and, in all honesty, because I missed my philosophy classes at university! Little did I know those dinners would turn into a career path as a philosophic impresario—which, to my knowledge, isn’t an official career path, but I’m totally fine with that!

Our group was one of the first Circles. It started when I was developing events with a co-working space called Impact Hub NYC. Julie from the 92nd Street Y reached out to see if I’d be interested in hosting Circles, and it was an immediate YES! Since the early days, we’ve tried out numerous spaces, from co-working offices to a church to bars. It’s really been more about the people than the location for us.

I’m consistently amazed and thrilled there are people who are interested in taking time from their busy schedules to gather with a group of strangers and discuss what it means to live virtuously. These are free gatherings, so anyone can attend, and I’ve been touched by how giving and vulnerable our attendees have been.

That’s like Sophie’s Choice! When it comes to the virtue that means the most to me in terms of my moral compass, I’d say Justice… for an infinite number of reasons. In terms of the virtue that most impacts my day-to-day, I would say Resolution. I’m like a butterfly in terms of interests and passions and goals and dreams, so I really do have to—to borrow Franklin’s words—resolve to do what I ought and perform without fail what I resolve.

Taking back my mornings! As an actress and freelancer and traveler, it’s easy for me to lose any sense of routine. But I’m doing a lot of writing lately for my upcoming podcast and other projects, and I’ve become aware of the fact that my brain really only functions that way in the morning. So I’ve committed to waking up between 6 and 7 a.m, and going straight to my writing, followed by a run or yoga when I need a break. It sounds boring, but I’m really enjoying it, especially since I don’t spend the rest of the day feeling guilty about not being productive enough!