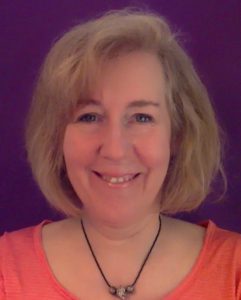 To earn a living, I teach, facilitate, tutor, coach, write, design instructional materials, and deliver workshops. My main love right now is facilitating Authentic Relating Games. The games create fun structures that lead pretty quickly to more meaningful conversations. We play with skills such as curiosity, empathy, noticing, and perspective taking. I’ve incorporated some of the games into my Franklin Circle, especially during the session on Sincerity.

Other big chunks of my time have recently gone to facilitating community dialogues, completing an eight-month Women’s Leadership Institute program in applied feminist spirituality at Hartford Seminary, and getting exercise in slightly odd ways. For example, I’m completing a virtual thru-hike of the Pacific Crest Trail. I hike here in Connecticut and map my mileage on the PCT. I use the internet to get photos and stories from along the real trail, so I have a real felt sense of my progress along these 2,659 miles. I’m also a big fan of the Norwegian Cardiac Research Group’s seven-week fitness plan. And dancing in the kitchen—best exercise ever!

My mission in life is to help people hear each other, so, when this opportunity came up, I didn’t hesitate. Ben Franklin Circles also fit in well with my beliefs about healing America’s seriously wounded political milieu. We tend to start political discussion by debating only two solutions (as if there were only two sides!) to a problem that we haven’t actually named. Often we’re not even discussing the same problem. I believe that, when we start with naming values, move to exploring possibilities, and then compare pros and cons on all major options, we wind up with much more effective political discussion and healthier action.

We’re generationally diverse with representation of each decade ranging from 21 to 75 years old. I started recruiting the first weekend by just bringing the project up in conversation everywhere I went. I’d say with some excitement that I was going to be part of new program that involves hosting conversations about values. I thought it would be hard to find people who’d be willing to commit to 13 sessions, but four women immediately committed without really asking many questions at all. Their instant commitment seemed too good to be true, but they’ve stuck with it! I realized that these four women were a lot like me in the kind of work we do and our political perspectives, so I started to reach out to men and also asked my group members if they could invite people who would bring in a perspective different from ours—different kinds of work experience at the very least. In the end, we wound up with diversity around age, race, work, and gender, but maybe not so much around politics.

I’m happy to now be in partnership around getting difficult things done—building Industry, in Ben’s language. I have two people who meet with me on Zoom once a week to tackle a task, build some momentum, and celebrate. It makes the to-do list a lot more fun, and it definitely increases my efficiency. This started in the Circle, but now I’ve added another person from out of state. Our sessions really get things rolling; I feel like I build momentum for the rest of the day.

In the categories of Justice and Silence, a dear friend and one of our group members, recently invited me to be a guest on a podcast around silencing women’s voices. It was, in part, inspired by our Circle on Justice. It felt like a watershed experience—just being able to speak and be recorded about silencing.

Also related to Silence, early on a couple of group members mentioned difficulties with listening while others in the group are talking. It made me realize that providing support around listening skills may be important for every group I facilitate. It seems that one of our more engaging conversations was the one that we had around things that help you listen. I plan to keep working on this.

Hands down, it’s Sincerity. Sometimes we discourage people from speaking honestly for themselves. We fail to surface the very human issues driving conflicts and disconnection. Great talent and great ideas are lost because we’ve established shared habits around covering over things that might be a little difficult to talk about. Sometimes we actually need to be silent, but other times our silence is just a toxic byproduct of habit and distraction.

For political reasons, we seem to have morphed into a “complain and blame” culture. This keeps us from digging into areas we have the power to influence ourselves. We give away our own power. I want to go deeper into human connection and create space for each other’s strengths to come out and shine. That’s what Sincerity is about to me.

I’ve made a Justice commitment to write two letters asking for action around two specific incidents of injustice. I’ve already written to the Ombudsperson at a nationally renowned hospital. I asked for more information about its above average rate of hospital-acquired MRSA infection (according to data from the CDC and Consumer Reports). Patients wind up going to the hospital for one thing and dying in the hospital of sepsis from a MRSA infection acquired there. I’ve noticed that other hospitals in the area have improved their MRSA infection rates and have taken up specific programs to do so, but this hospital doesn’t appear to be using either of the improvement programs that have been successful at other hospitals.

The second letter, to a different party on a different issue, feels more challenging to me. I’ve been a little bit stuck on how to write that one since there’s evidence of bias that may be hard to work around. This one’s more personal. Still working on it. It feels so hard.