The monthly Ben Franklin Circle which meets at The Commonwealth Club in San Francisco takes a different angle on virtuous self-improvement and its value for society. We do not directly discuss how to inculcate a particular Franklin virtue in our personal lives, nor do we relate tales of success or failure at being virtuous.

Instead we discuss the ideas themselves.

We think about them, perhaps as if we were as young as Ben was when he laid out his plans for self-improvement (a few of our members are almost that young, but more look like Ben on the $100 bill).

The context in which we discuss the Franklin virtues is that he pursued them with the goal of living a successful life, both personally and socially, and we assume that he achieved both goals in his life.

We also recognize that, when analyzed line item by line item, he often came up short. But like a superstar baseball player, who still strikes out more often than he hits home runs, it is Ben’s lifetime batting average that measures success. Not some imaginary state of perfection. Because if Ben Franklin did not succeed at life in spite of all that he accomplished, the chances any of us will succeed are definitely remote.

So we pick one of the virtues to discuss and then think out loud about what that virtue really is, and whether it actually is a virtue, and sometimes discuss what it used to mean in other centuries.

We also ask each other whether it is still valuable today for our own personal and societal pursuit of happiness. 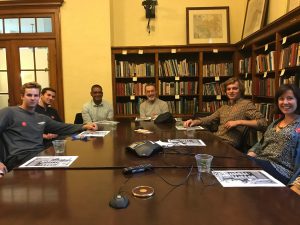 When we discussed Humility several months ago, the consensus conclusion was that it meant something different in the 18th Century than it does today, and that it means something different if you are religious than if you are not. In the secular pursuit of happiness, it makes the most sense to have an accurate opinion about yourself, neither lying to yourself by exaggerating your strengths (Vanity) nor by exaggerating your weaknesses (often thought of as Humility). So an accurate version of Self-Respect might be the closest term to describe the contemporary secular virtue.

In the religious pursuit of happiness, however, the foregone conclusion is that it is vain to think you can decide for yourself how to live your life, so you should obey God’s visions, his commandments, in order to eventually be happy in heaven, the reward for that obedience. This is why Humility is the religious version of this virtue, and that has not changed over the centuries, because it is at least a slight exaggeration of our human weaknesses to conclude we just totally fail at life unless we obey a divine authority.

An interesting tangent in our discussion arose due to Ben’s gloss on Humility: Imitate Jesus and Socrates. At first it seemed to us that Ben had struck out on that observation, because there is nothing humble about thinking you can imitate Jesus or Socrates.

But we found that his gloss held the key to understanding what Ben meant by Humility.

Socrates concluded that the reason the Delphic oracle considered him the wisest Athenian was because he knew that he did not know, while other Athenians thought they knew when they didn’t. And Jesus knew when to fold ‘em, after playing a very bold hand, because he must have realized he had so severely provoked the religious authorities that the game was over. In neither case is there exaggerated weakness, nor exaggerated strength, so we concluded that Ben Franklin’s concept of Humility must have been similar to the current secular admiration for Self-Respect.

Since Ben and his friends were clearly free-thinkers in the midst of a religious milieu, we suspect that our conversation about Humility might have been similar to what Ben’s original conversations, when he and his friends were young, were like. His life certainly seems to have been lived with a rational amount of self-confidence. But whether that is true or not, it is clear that American culture has definitely been positively influenced by all that thinking before acting that Ben Franklin engaged in with his friends.

George Hammond is a retired mergers and acquisitions lawyer who has written books on Plato and early Christianity. He currently organizes a Ben Franklin Circle out of the Commonwealth Club in San Francisco, California.