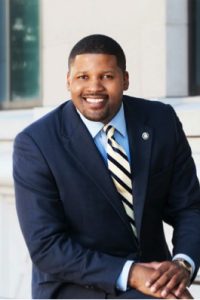 In the Jacksonville community, I am the past president of the D.W. Perkins Bar Association, a civil rights organization which consists of Jacksonville’s Black lawyers and judges. I met Chris, the United Citizen Power (UCP) organizer in my area, during his time at Florida Coastal School of Law. He proposed the idea to me, and I wanted to show support for what he was doing to engage residents in improving the area.

How did you recruit members for your Circle? Lessons learned?

I used my connection with the local radio station as well Facebook and Twitter to spread the word about the event. Chris and I also went out door to door to pass out flyers and do sign-ups.

It was an amazing experience. I love the chance to be proactive for instead of reactive to change—and that is what this felt like to me. I like that the participants all cared about different issues, but were willing to listen and provide constructive suggestions to help each other.

Because I am a pastor and a lawyer, I would lean towards justice. The ugly truth is that those in power in my community just don’t care about what happens to the people in the low-income areas that I came from. It is painful to see the lack of justice. Those from the community that helped get me to where I am are oftentimes ignored and passed over by their decision-makers in government. It is important to me to change that.

That I would use the knowledge and the skills I have to do more in the community. I have been impressed with the work I have seen Chris and United Citizen Power doing in such a short time here. For a while, I believed members in the community didn’t care. But, through the my time in the field, out knocking doors with Chris and other UCP volunteers, I saw that people are waiting for a chance to be heard.