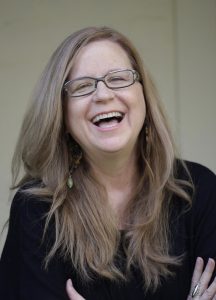 I’m the Founder & CEO of an organization called The Village Square.  We’re devoted to building community across the partisan divide in hometowns.  We’ve been in Tallahassee for over a dozen years and now have locations in other communities.

Because of my work with The Village Square I’ve been a Ben Franklin nerd since I learned about his Club of Honest Whigs and Junto.  I find the kind of community gathering in London coffeehouses to discuss the issues of the day so compelling – I so strongly believe that engagement between people with different ideas and expertise generates inspired thinking and solutions to problems. (The Surprising History of London’s Lost Coffeehouses). At The Village Square we’ve been co-hosting a series called The Club of Honest Citizens inspired by Franklin’s example for a number of years (we’ve event hired Ben Franklin impersonators), so really when we learned about Ben Franklin Circles the idea that we’d host one seemed like fate.

Because The Village Square is intensely focused on bridging the partisan divide, our Ben Franklin Circle had to be ideologically diverse. In some ways, I had a head start on being able to achieve this kind of ideological diversity, with a mailing list grown over more than a decade. But it was really the old-fashioned way that ultimately gathered our group — word of mouth, me reaching out to a friend who reached out to another friend and so on.  Our bias is that it really is this kind of “analogue” rather than digital community that is the answer to most every challenge.  It’s all about the relationships — that’s what in the end creates the “glue” that holds gatherings like this one together. I like to think we did it the way that Mr. Franklin did, though with a little assist from email (and no horses were involved).

Because of the commitments I have in running a small nonprofit, it’s a rare evening that I just take some time to visit with others. The Circle has really helped me in finding that space in my life— at least once a month.  I don’t think I’m alone in this particular challenge, I personally think it’s the societal challenge so many of us are having — and it’s a major contributor to the weakening of social capital across the partisan divide that I’ve devoted my life to addressing.  So for me personally it’s this wonderful space with deepening relationships – each week it gets just a little more satisfying and natural as our relationships grow.  It’s also a unique opportunity to speak about ideals and values, which as a society we’re not doing enough of.

Humility.  I can’t wait to get to it.  If I had a Magic Genie who would grant me one wish for our country it would be that we would all have more humility — that we’d be less sure of ourselves and our political tribe, ask more questions, be more open to learning from others. Our lack of humility is nearly an epidemic and I fear the repercussions of it are collapsing in on us. Can you imagine if we elevated the value of humility in our culture?  I so deeply value humility that I put it on a t-shirt.

Order is my challenge. It’s the most recent virtue we did in our Circle. I thought about passing it off to someone else as the leader because I’m so challenged in this particular area.  It’s not that I don’t value or appreciate the critical importance of order, it’s that I’m so busy and so foundationally the “creative” type that circumstances conspire to prevent me from also being highly orderly.  I work so hard to get so many things done that I’m forced to either get fewer things done or focus on being orderly.  If I had a month to just get everything in order it would be such a joy — I do realize that it costs me time in finding things — but lacking that I’ve promised myself to try to have whole weekends off and make progress every weekend. I made this promise to myself and publicly to the Circle so that I would have to fess up to them if I failed.  So far, I’m at least headed the right direction. Wish me luck (I’ll need it.)  If I don’t get there, I’ll file everything when I’m retired, I promise!

Join an information session for new and prospective hosts. Offered every 2nd Friday of the month.  REGISTER HERE