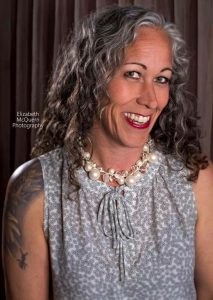 I work full time as an accountant and on a part time basis I am a bartender, handywoman, and maker of upcycled/repurposed junky stuff. I love to travel and am trying to do more of it. I love to write and create. Honestly, I am doing less of it than I used to since I have a new relationship in my life. Falling in love and making room in my life for another has thrown me off of my game a bit, but things seem to be falling back into place.

100% of what drew me in was the potential to build community with thoughtful people. I have been a part of book clubs and love the idea but do not always have the time to read a whole book, particularly on schedule, so I found myself missing those meetings to avoid the “I don’t have anything to add” feeling. I love Socratic discussion and I don’t think we get nearly enough in our daily walks. It’s enlightening to be in a group setting and drawing upon others’ perspectives and experiences. It adds to my understanding of things in life and I always have a sense of wanting and needing to understand and make sense of it all.

My group is all ladies. I asked two men to be a part of the group but neither replied in a way made me believe they wanted to do it. I first approached a woman I met at an event that brought strangers together for discussion over a meal. She has this positivity and calm that I admire, and I wanted to be around her. So, barely knowing her, I approached her with the following message:

“Because I find you as interested as you are interesting, because you bring wisdom of age, because you have a large heart, and because I believe you want to improve the world, I would love to discuss with you a Ben Franklin Circle, specifically, to be a part of one which is forming as I am sending this message, as you are my first ask! But this is a no-pressure situation.”

I carried on with my awkward message from there. No one in this group had heard of a Ben Franklin Circle, so I had to explain the whole thing. She said yes easily, to my surprise. I asked her to ask someone she might not know but admired in some way. I asked everyone who joined our circle to ask someone just like I did; to step out and be vulnerable in an attempt to build a connection. I think they were flattered at being asked to join, so they approached it knowing that whoever they asked would also be flattered, and that made it easier to be vulnerable, even awkwardly so, in their initial ask.

We have a range of ages with a few people each in their 60’s, 50’s, 40’s and 30’s. I was very surprised that one gal who expressed interest in my group lives in Chicago. I offered to put her in touch with a Chicago group so her drive wouldn’t be as long. Instead, she invited another friend from Chicago, and they make the trip together every single month. Their dedication to showing up regularly has been quite impressive.

Our circle is comprised of 2 teachers, a UPS delivery driver, one retired ad exec, one legal assistant/book publisher, one HR professional, and myself. We come from different walks of life in terms of our socio-economic, religious, and political backgrounds.

In terms of a racial diversity, all I can say is I shot for it. We are not a homogenous group, but it is perhaps not as diverse as I had hoped.

I knew I wanted to build community, but leadership skills are not my specialty. I was certain I could get it up and going but I worried about the novelty of it wearing off and it feeling like a chore. But, I feel dedicated to prepare for each meeting because I know they are dedicated to coming and having informed and thoughtful discussion.

I started a Facebook group for our circle at the start of it, where all discussion, links, and events for our monthly meetings are located. I noticed that my attempts to engage the group in between meetings became less frequent after a few months and I had to push myself a bit. Since I was feeling guilty about it, I admitted it to the group and I invited others to volunteer to facilitate a meeting and let them pick a virtue they wanted to work with. That has been fabulous, because A) seeing them be prepared and ready to lead motivated me, and B) I got to see different styles in facilitating and got some ideas about how I could be better at the whole thing too. I still feel iffy about my leadership skills overall, but I learned that I really enjoy and do better in a leadership role when collaboration with the entire group is a factor. Prior to this, I just thought I just didn’t have any leadership skills at all.

As my group meets tonight, for it’s 11th meeting, we have started discussions on where the group goes next.

The virtue that has meant the most to me, and I believe, the entire group, has been justice. I think it’s because there is so much injustice right now, or we are so aware of it because of social media and the 24-hour news cycle. Each of us considers ourselves “woke” to issues of injustice, be it economic, environmental, criminal, racial, etc. I think this one means the most to me, because it’s so unbalanced, and that unbalance is based on things that we are conditioned to believe are important (skin color, how much money one makes, or how they make their money, etc.) True justice is elusive to some groups, and that is not a mark of a civil society to me. Many in our group have signed up to be members of the launch team for the re-boot of the The North Star (Frederick Douglas’s abolitionist newspaper (est. 1847) which is being rebuilt by racial justice advocates Shawn King & Benjamin Dixon. We are all taking some action to work for true justice.

The last commitment I made was about Frugality. It was primarily about being frugal with my time. With this virtue in mind, I also decided not to buy a TV (to save both money and time.) Through this process, I have learned that I often run on auto-pilot; mindlessly moving from one task to the next. I have had to admit to my group that I read the articles, took the quizzes, and listened to related podcasts, but in my day-to-day life, I did not give the virtue much thought. I now aim to be more mindful and less on auto-pilot.