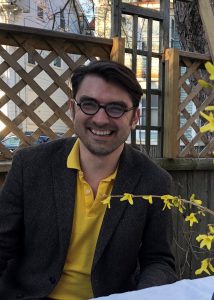 Pronouns: he, him, his

I work for a publishing company as an acquiring editor of food and craft books. I often describe my job as having to come up with a new idea every day, but essentially I’m shepherding books from concept to bookshelf. Outside of my professional role, I’m interested in creating opportunities for different kinds of communities to gather, which is how I got interested in Ben Franklin Circles. For fun, I really like to eat and cook and talk about what to cook and eat next.

I learned about the Circles through the April 2018 New Yorker article, which came out around the time I was looking to transition one of the communities I manage from primarily social and seemingly superficial to being more engaged with ideas and outcomes. Also, the dissonance and inexplicability of the 2016 presidential election left me deeply troubled and looking for ways to mend or (apparently) build a social infrastructure that was rooted in American distinctiveness but also resonant with the diversity and realities of my contemporary life.

Our group’s primarily composed of friends of friends. We don’t advertise per se, but some folks have found us through the Ben Franklin Circles website. We meet in a private room at a local brewery (inspired by Franklin’s alehouse Junto meetings), so our interaction with that public space has generated some general awareness and interest. The composition of every meeting has been pretty different, though, and while I’m not necessarily looking to grow the group (we have a stable core), I am definitely eager to include folks who seek us out and are interested in and committed to the conversation.

I’ve had to embrace the idea that while doing a lot of prep work is important, I can’t really plan, let alone control, the conversation, and that that’s a good thing. Each of our meetings has been really different, and our conversations have developed in organic, surprising ways that reflect the internal diversity of our group. Letting go of my desire to anticipate where the conversation is going and how it’s going to get there, and instead anticipating that everyone will lead us somewhere different and contribute something I hadn’t thought about, has been really freeing for me.

Silence surprised me. I am much more comfortable with calm and quiet than loud and noisy, so while I thought my grasp of the virtue would be especially strong, our conversation informed by Franklin’s description, “Speak not but what may benefit others or yourself,” actually forced me to think about how and why I could/should speak up more to benefit myself or others. Turns out for me, the virtue of silence isn’t necessarily about being quiet, it’s about using my speech more effectively.

I’ve honestly not been so great at making concrete commitments for each virtue. . . I definitely KonMari-ed my sock drawer as a consequence of our conversation on Order and have been trying to be conscious of finding pleasure in what I eat and drink rather than just intemperately eating and drinking. . . I guess I should Resolve to be better at making commitments. . .