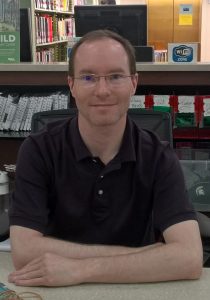 I’m a librarian, a job I love. In my spare time, I write and like to participate in religious and volunteer opportunities.

The philosophical element of the Circles is what most attracted me. Where in society can one discuss big themes? There’s art and religion, but little else. The same goes with civics; what does the social contract look like these days? That is an interesting question to address.

The group is majority retired persons and also persons in transition, either having recently moved or looking for work. This is actually the second cycle, so three people remained in the group from the previous year. Initially, people came to us via the library’s website and advertising. The recent published articles on Ben Franklin Circles have brought some interest as well.

It has made me more articulate in my language and thought, to be honest. To discuss these ideas requires precision because the words have different meanings for each person. It has also given me facility telling and retelling personal anecdotes for myself and others I know, which is necessary to illustrate how to live out each particular virtue.

It was around temperance. I’m cutting back on carbs. Salty snacks are my weakness. A coworker has a relative who works for a major producer of them and often brings in bags for all of us. While I need a hit of glucose, the backstory of these products and their sugar isn’t encouraging. So far, it is going well enough. As I’ve learned, food is a topic that brings everyone together!