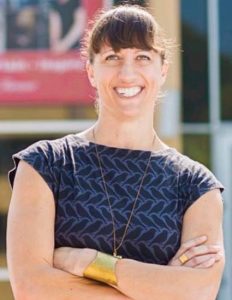 I’m lucky, running the Ben Franklin Circle is part of my day-to-day activities as the Santa Barbara Circle is part of the library programming where I work. We started the Circle this past January at the Santa Barbara Central Library and, as a Programming Librarian, I get to run and take part in the Circle. Besides being a librarian and providing services and programs to my community that way, I am also part of the leadership group for the Santa Barbara chapter of Showing Up for Racial Justice (SURJ), a group that works to dismantle racism through education for white communities and support of organizations run by and for people of color. I also love to read (typical of a librarian), cuddle with my dog, snuggle on the couch while reading or go to the beach with my dog and partner.

We had already been thinking of starting a Ben Franklin Circle at the Library as part of our civic engagement and community building programming and the more I looked into the Circles, the more personally intrigued I became. Quite often we look to become better people, but on an individual level of experience. The idea of self-improvement in the company of others and sharing the experience while also learning from each other seemed pretty powerful. I’ve always been an athlete who participated in team sports, there is just something special about the motivation and support of a group that pushes you beyond what you think you can do, and the Ben Franklin Circles just seemed like a different version of that.

The Santa Barbara Central Library is quite fortunate to have a relationship with the local university’s cultural office, UCSB’s Arts & Lectures, and in December of 2017 we hosted a conversation with Emily Esfahani Smith. We announced at this event that we would be starting a Ben Franklin Circle at the end of January 2018 and encouraged those who were interested to sign-up. Honestly, we couldn’t have asked for better marketing, we were lucky to have these things come together.

Our first meeting had over 25 people attend, which was more than we expected and we ended up splitting into two groups for discussion. Over the months this has edged down to about 15 regulars who attend as they can. Our group tends toward the over 50+ in age, but we do have a good number of individuals in their 30s and 40s, too. One of the things that has surprised me is that we consistently have an almost even ratio of men to women at all of our meetings, which is great.

From the beginning our group has been quite open with each other. This isn’t necessarily something I had expected. I hoped that the group would become comfortable enough to share at a deeper level, but those who have come I think had already opened themselves up to the idea of self-improvement in a group situation and what that means for being honest and open in our discussions.

Silence: Speak not but what may benefit others or yourself; avoid trifling conversation.

There is such a great depth of meaning behind the way Franklin defines silence. It isn’t about “being quiet” in the general sense that one might associate with silence, it is instead a thoughtful consideration of ones words and how we use them. Far too often we can be dismissive of things people say as jokes, or small mistakes, or just part of the culture. However, when we really take the time to think about what we are saying, we can see deep threads of prejudice and ignorance. To reframe our words and how we say things can be a very powerful tool for bringing about change and justice we might like to see in the world. Franklin’s definition, to me, also encourages a deeper connection in our conversations. If we “avoid trifling conversation” then we instead engage on matters we care about or things we and others are interested in. For those of us that are talkative, it is also a great reminder to yield the floor and listen to others. If we don’t practice personal silence then we have no means of hearing others.

Oh man, our Circle had the wonderful timing of practicing Moderation (Avoid extremes; forbear resenting injuries so much as you think they deserve) in November, so that was something to think about for Thanksgiving. 🙂 Granted, most of our commitments didn’t have anything to do with eating or drinking, but it did come up in the conversation. I took one of the suggested commitments as it was quite apt for me. Over the month I took notice of when I felt offended, recorded this, and then returned to the list to review how I felt a few days later. Examining the list to see if I was “resenting the injury” more than it deserved was a learning experience. Thinking about the moments of “injury” brought up questions around how others might have been feeling, what they might be going through, why I may have been more sensitive at the time, or why a particular subject irks me. For me, practicing Moderation has been more of an implementation of self-reflection and observation than of cutting back on anything.