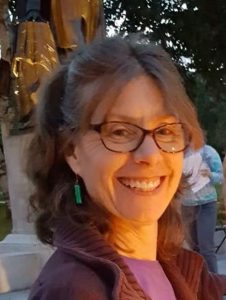 I was drawn by the opportunity to create dialogues about values rather than ideology. This is a labor of love, conducted under the auspices of my soon-to-be sole proprietorship, Stone Soup NH.

For the one in Deerfield, where I live, simple word of mouth in a connected community got us six members and growing. This group meets in a member’s home. I recently started another one about 15 miles away, in Concord. Word of mouth and a little advertising has brought in four people, and I expect this to grow. The Concord group is open and is on the BFC map.

For the last few decades, I have been building skills to invite people to learn things about themselves that might make them uncomfortable—such as exploring what it means to be racially identified as “White” or that the person they have demonized possesses their own moral integrity. I most frequently do this in dialogues, workshops, and class settings. I root my work in affection. The Ben Franklin Circles are a surprising natural extension of this work, showing me that personal truths can link to larger systems, even when this is not the explicit agenda.

We’ve only talked about the first three so far, but I’m hoping Industry will inspire me to greater discipline.

The last deep one? To “Live the life you’ve imagined,” which I made about six years ago. It’s taken a while, but seems to be coming into focus. When I set this phrase in front of me (literally, painted onto a block of wood I keep in my office), I made my living as an office manager and worked to bring people together on the side. Since then, I’ve released that administrative work and now support myself with facilitation and teaching.