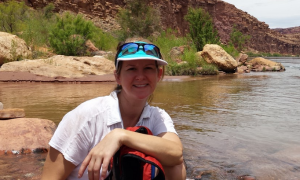 I am the founder of Sedona Philosophy, where we use the amazing natural environment to unlock personal growth and transformation. Sedona Philosophy combines my two favorite things—thoughtful conversations and immersion in nature. We guide people through a practice of inquiry that helps them understand themselves, others, and the world. Our tours and retreats explore personal topics, like mindfulness and self-understanding, as well as more general ideas, like artificial intelligence and phenomenology. One of our biggest surprises was how interested people are in phenomenology. That’s the study of lived experience, or quite simply, how we interact with and are affected by phenomena. Of course there is no better place to explore your perceptual and emotional life than outdoors in Sedona, so maybe we shouldn’t have been surprised.

Sedona Philosophy takes up most of my time, but I also volunteer on several boards, and I love civic engagement. Politics is often cast as something negative, but it can be positive, especially at the local level. I’m an independent (not a member of a political party), and interested in alternatives to the two-party system. A lot of people say that the two-party system is inevitable, but general skepticism has always piqued my interest. I mean, people used to say, “what are you going to do with a philosophy degree? Open a philosophy shop?” I thought, why not?

Two things drew me to the Ben Franklin Circles. First, I’m attracted to most programs that create an opportunity for philosophical dialogue. Second, a few years ago I co-taught a class with a business dean called, “Leading Yourself,” and we used Franklin’s virtues in that class.

Before I started Sedona Philosophy, I founded a program called Philosophy in the Public Interest. The inspiration was to take philosophy out of the classroom and into the community. I really believe that philosophy should be a practical resource for daily life. Philosophy, as it was originally practiced, was rooted in dialogues much like the ones we have in the Ben Franklin Circles. Trying to understand and cultivate virtue was a big priority for Plato, Aristotle, and the Stoics alike. So for me, step 1 was taking philosophy out of the classroom and into the community. But step 2, which I think is even more exciting, is taking philosophy into the natural world—and that’s what we do at Sedona Philosophy. We usually approach topics differently when we are in nature. I see it happen all the time. When people step outside they are more creative, less inhibited, and more compassionate toward themselves and others. Something about magnificent landscapes and rushing water helps us shake off our everyday assumptions, and invites us to reimagine ourselves and our world. That’s why our Ben Franklin Circle meets outside, at Red Rock State Park. Except when it’s really cold, then the Park Manager let’s us huddle inside the Hummingbird Room. We like the outdoors, but we’re also pragmatic. Which reminds me to say that Sedona Philosophy is inspired by the American Pragmatist tradition, as much as the Ancient Greek one.

Sedona Philosophy has a mailing list, so I just asked local people to apply. We mapped out all 13 months in advance. Just like Franklin’s original Junto, we share our insights about the virtues, as well as current events and books we like. Quite a few books have been recommended and lent out in our Circle. We’ve had some attrition, but those who stuck with it have become a pretty close knit group. Having said that, we’re open to expansion, so anyone in the Greater Verde Valley, or for that matter, anyone visiting Sedona, should feel free to get in touch.

Hosting a Ben Franklin Circle has made me realize the value of having the same group of people come back together over and over again. That was Franklin’s model, and of course that’s what the Greek philosophers did too. They had a circle of friends. Many of our Sedona Philosophy programs are one-off, and there are constantly new people involved. I think there are benefits to both sorts of programs, but with the Ben Franklin Circle, I have enjoyed seeing the group dynamic evolve. As a result, we are going to start a philosophy reading group with a recurring membership.

Our circle hasn’t discussed this virtue yet, but I am most interested in tranquility. I feel like the media, careers, and so many social influences tend to get people, and me, really amped up. I think tranquility and peace are welcome alternatives to the busyness of modern life. And of course I think that spending time in nature encourages tranquility too.

Well, my last commitment was about industry. It has actually been going pretty well, because one of our Circle members and I made a deal that we would spend time each morning meditating, and being very conscious about how we were going to spend our day. I’ve been doing that pretty consistently, and I wonder how the other member Eddie is doing. I’ll have to ask her when we check in next month! One of the great things about having a Circle is that you can decide in very specific ways, and in collaboration with other people, the best way to bring a virtue into your life. Also, you can think about how things that might seem to be in tension with one another can actually be complementary—like tranquility and industry. If my commitment to industry is grounded in meditation and guided by an intentional focus, my energy will be directed toward accomplishing what I care about most. An ethically-grounded commitment to industry can contribute to tranquility. Those are the kinds of things our Ben Franklin Circle has helped me discover.

Join an information session for new and prospective hosts. Offered every 2nd Friday of the month. REGISTER HERE