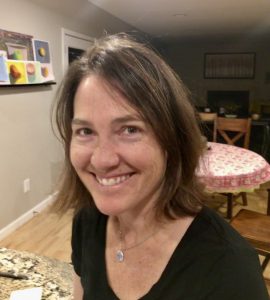 What do you do when you’re not running a Ben Franklin Circle and what prompted you to start one?

I host another conversation group that I call Civil Conversations. It’s a bit different than the BFC format in that we meet biweekly, it’s open to the public and the topic for the evening is chosen that night by participants. It’s an opportunity for community members to be in conversation with each other which I believe is so needed these days. In addition to that, I fill my time with family, reading, art, music and outdoor activities.

I have been a long-time admirer of Benjamin Franklin. In high school, after learning about him, I created my own list of virtues. When my kids were young I started up a ‘Junta’ club for other mothers. (Junta was my female version off Franklin’s Junto club …. nothing to do with a revolutionary seizure of power.) Due to life being busy it never really took off though. 20 years later someone sent me information on Ben Franklin Circles and because of the conversation group I am currently running it seemed like an ideal opportunity to again delve into Franklin. I loved the idea of the conversation taking place around his virtues.

I really wanted to pull from the greater community for this Circle. I opened up the opportunity to members who are part of my Civil Conversations group as well as posting invitations on Nextdoor and on Meetup. We had an initial meeting with 16 people in July of this year. The July meeting was a chance to talk about the virtues as a whole, get to know each other and set up our rules and procedures. The group we had was extremely diverse, not people who would ordinarily come together in a room. Because of this, I am really glad that I didn’t just dive right into the virtues but rather took the evening to set up the foundation for the group. This allowed for the creation of a strongly committed group of 11 members who chose to move forward from there. We had our first virtue meeting in August.

Where does your group meet?

We were initially meeting in a conference room at the local Arapahoe Public Library. However, the library is currently closed due to renovations so we had to find a new space. Because I wanted to continue to meet in a public community space I went around asking hotels if they could offer us a space to use free of charge. I think the idea that we were community members meeting to discuss ‘virtues’ was helpful and people were extremely gracious. We are currently meeting in the conference room of a local Hampton Inn & Suites. We meet on Tuesday evenings and the room usually is empty anyway.

I have loved having the opportunity to dive deep into Franklin’s virtues. I’m always blown away by how vast each conversation actually becomes. A good example of this is our discussion on the virtue of ‘Quiet’. We started out talking about the pros and cons of Franklin’s virtue of Silence. When is Silence a good thing and when is it harmful? We moved on to discuss the immense noise of our lives and how we crave more space and moments of silence and what these rare moments provide for us. Then someone brought up the ‘anechoic chamber’ at Orfield Labs which is the quietest place on earth and becomes unbearable to anyone after just 45 minutes in the space. Is Silence really what humans need? Why do we think of Nature as silent when really it’s quite noisy? This brought up the idea of natural noise versus man-made noise and how nature as noisy as it still feels so quiet. So …. what is it that we truly crave? The distinction between Silence (the absence of sound) and Quiet (the absence of noise) was then discussed. We ended our 2 hours contemplating whether Quiet was a more appropriate virtue than Silence.

We are only on our fourth virtue so that’s hard for me to answer at this point. As this is my first opportunity to facilitate a BFC and everyone in our group is new, one of my favorite things so far is how our group seems to grow and develop right along with the virtues. Our discussion on Temperance set the proper tone from the beginning with the idea of balance in all things. It was a reminder to examine each of the virtues in both a positive and negative light. With our discussion on Silence, I intentionally incorporated more space for Silence in our discussions; with Order, I brought more order to our discussion by creating a more structured beginning and ending. It’s kind of like our group is growing and developing organically right along with our examination of each of the virtues.

What would you say to someone thinking of starting a group?

I have found that people are really seeking out meaningful discussions and conversations in our communities. If you create the container people will show up. I also believe that the value of the Circles extends out beyond the circles themselves. As the people bring these ideas and these relationships out into their own greater communities. If at all possible make the invite out beyond your immediate community and take the opportunity to help bring down some of the illusory divisions between us.

Join an information session for new and prospective hosts. Offered every 2nd Friday of the month. REGISTER HERE